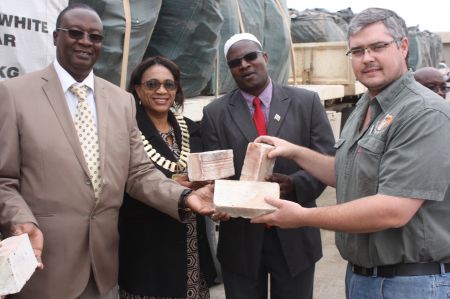 SWAKOPMUND, 30 AUG (NAMPA) – Some residents who lost their shacks to fire in Swakopmund will receive brick houses this year.

This is all thanks to NamClay Bricks and Pavers from Uis settlement who donated a total of 36 288 bricks to the municipality on Tuesday.

We are happy to give back to our community who support our business. These bricks can build up to 14 two-bedroom houses, said Factory Manager Albert Weitz Jnr.

Swakopmund Mayor Paulina Nashilundo thanked the company for the donation.

This is a good example of the private sector working with the public and Government to improve the lives of all citizens. This is an example to be emulated by all companies for us to take our country forward, said the mayor.

Nashilundo said 32 houses were destroyed by fire in the past two years and it is some of these people who will benefit from the bricks.
These include more than 100 people.

Receiving the bricks, Erongo Governor Cleophas Mutjavikua said this is a good example of Harambee (pulling together in the same direction).
We will inform President Hage Geingob in writing of your generous donation. The Harambee Prosperity Plan requires all citizens who have the resources to share with those who do not have, this is the only way we can take our people out of dire situations and prosper, he said.
He noted that he will sit with the municipal councillors and administration this week to decide on the way forward regarding the donation.

We know these people do not have erven on which to build their houses, but we need to start somewhere to ensure they get the houses, said Mutjavikua.
He cautioned regional politicians that their political careers in the next five years will be measured by how much service they deliver to the community they serve.

Mutjavikua said service delivery is the only measurement as people expect water and houses among other needs.

It is not about the statement you make at election rallies; if you cannot deliver then you fail your career. Let us pull together to deliver to our people, said the governor.
He also noted that his office and the municipality are working on a turn-around strategy for the landless in Mondesa and DRC informal settlement.